CLOSE
I'm interested in
Battersea Power Station welcomes first residents to Gehry Partners’ Prospect Place!
Fill in the form below, and we’ll
get in touch with you soon!
Tell us what you’re
looking for
Home Residential Commercial NEW! Industrial

Complete with the highest quality finishes, no two apartments are the same and the experience of purchasing an apartment designed by Gehry Partners is similar to buying a one- of-a-kind work of art. Many of the apartments offer views of the Power Station itself – one of the most iconic buildings in the UK – and every property comes with a spacious open plan layout and access to either a winter garden or terrace. Between the buildings is a residents’ garden designed by LDA Design, the landscape designers of the London Olympic Park.

Bringing the 15-minute neighbourhood to life, double-height retail units are located at street level, forming one half of Electric Boulevard, which will be the main pedestrian gateway to the development and a new high street for Battersea, offering a mix of office space, shops, bars and restaurants. Zara will be opening its first central London store south of the river on Electric Boulevard.

This new high street will also form an entry point into the new Battersea Power Station Zone 1 tube station - the first major extension to the London Underground network this century - connecting the destination and wider Battersea neighbourhood to the West End, City and beyond within 15 minutes.

In a one-of-a-kind opportunity, residents will have access to the adjacent building designed by prestigious architect firm Foster + Partners. In Battersea Roof Gardens, residents are able to make use of the state-of-the-art amenities including a 8,350 sq ft private Sky Lounge, a sunset bar, workspaces, cinema room, lounge areas and a gym. Residents will also be able to enjoy rooftop gardens designed by James Corner, who designed the New York High Line, and LDA Design. Alongside the high quality amenities, Battersea Roof Gardens will comprise 232 new apartments and new retail space positioned on Electric Boulevard with a 164-room art’otel, the brand’s first hotel to open in London, completing the building.

Prospect Place and Battersea Roof Gardens sit to the south of the Power Station, with a children’s playground, Prospect Park and Electric Boulevard, the new high street, also forming part of this phase.

Gehry Partners has designed two colour palettes for the homes in Prospect Place: London and LA. The London palette reflects the historical elements of the development with metal finishes and contrasting rich textures to create a streamlined industrial feel, mirroring that of the adjacent Power Station. In contrast, and drawing upon warmer climates, the LA palette is more relaxed with pale wooden finishes and a light colour scheme to complement the bright open spaces and waterside living experience.

A new show apartment has recently been completed, fitted with the LA palette, providing a first look inside the Gehry Partners' development.

Simon Murphy, Chief Executive Officer at Battersea Power Station Development Company (BPSDC), said: “Frank Gehry and his team have gone above and beyond in the delivery of world-class buildings at Prospect Place. It is an honour that Frank’s first UK residential project is at Battersea Power Station and its completion marks an important milestone in the development. When we first designed the masterplan, we envisioned a thriving community where people can live, work and play, and with every milestone achieved, we are ever closer to making that vision a reality, particularly as we prepare to open the Power Station to the public from September.”

Frank Gehry, Founder of Gehry Partners, said: “I love London. It has culture, history and diversity and the buildings we have created at Battersea Power Station are designed to stand artfully on their own amongst all of that, whilst also framing an internationally recognised icon.

“It is important we create social places for future generations and our goal from the start has been to create a neighbourhood that connects into the historic fabric of the city of London but also has its own identity and integrity.” 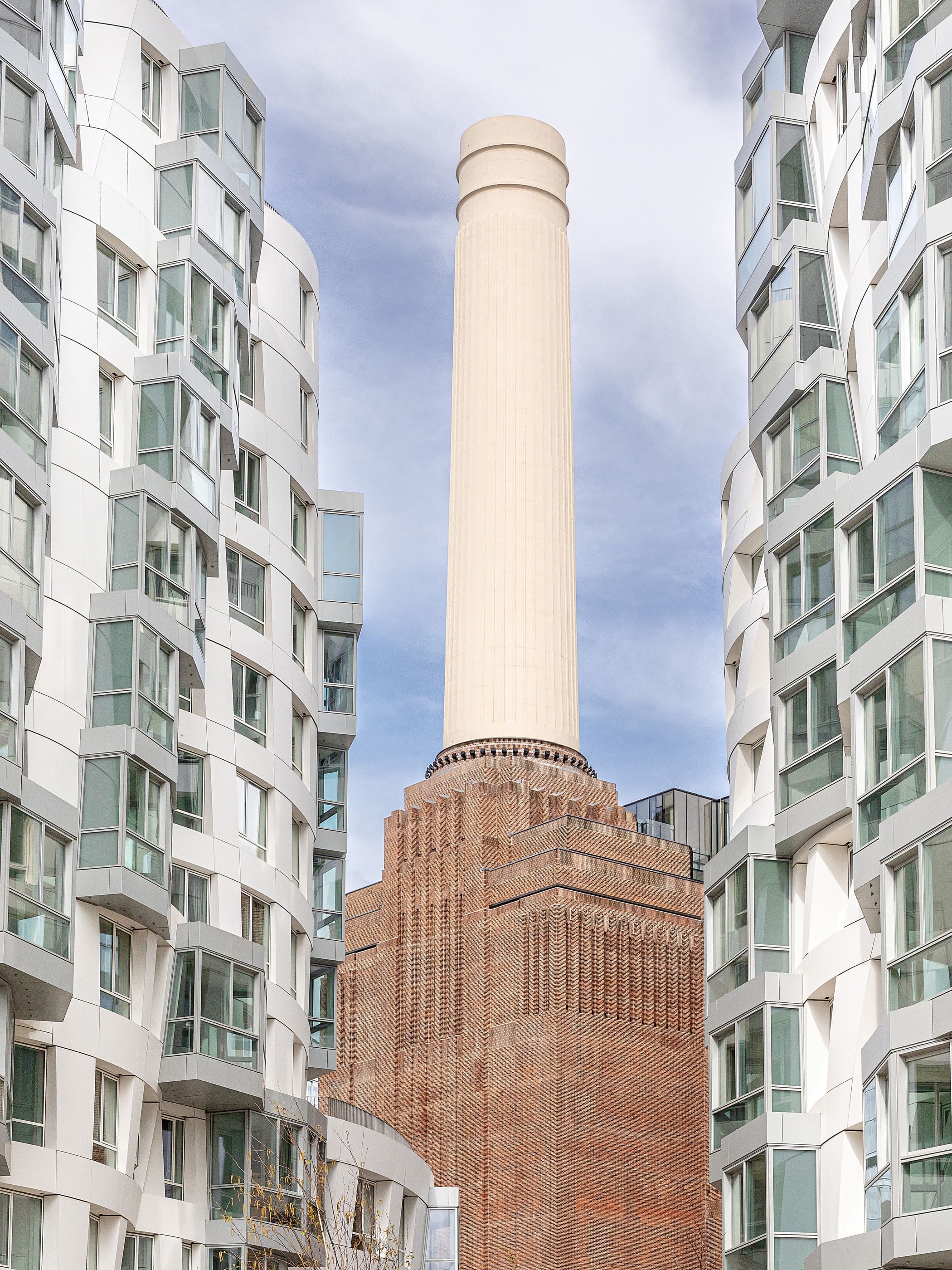 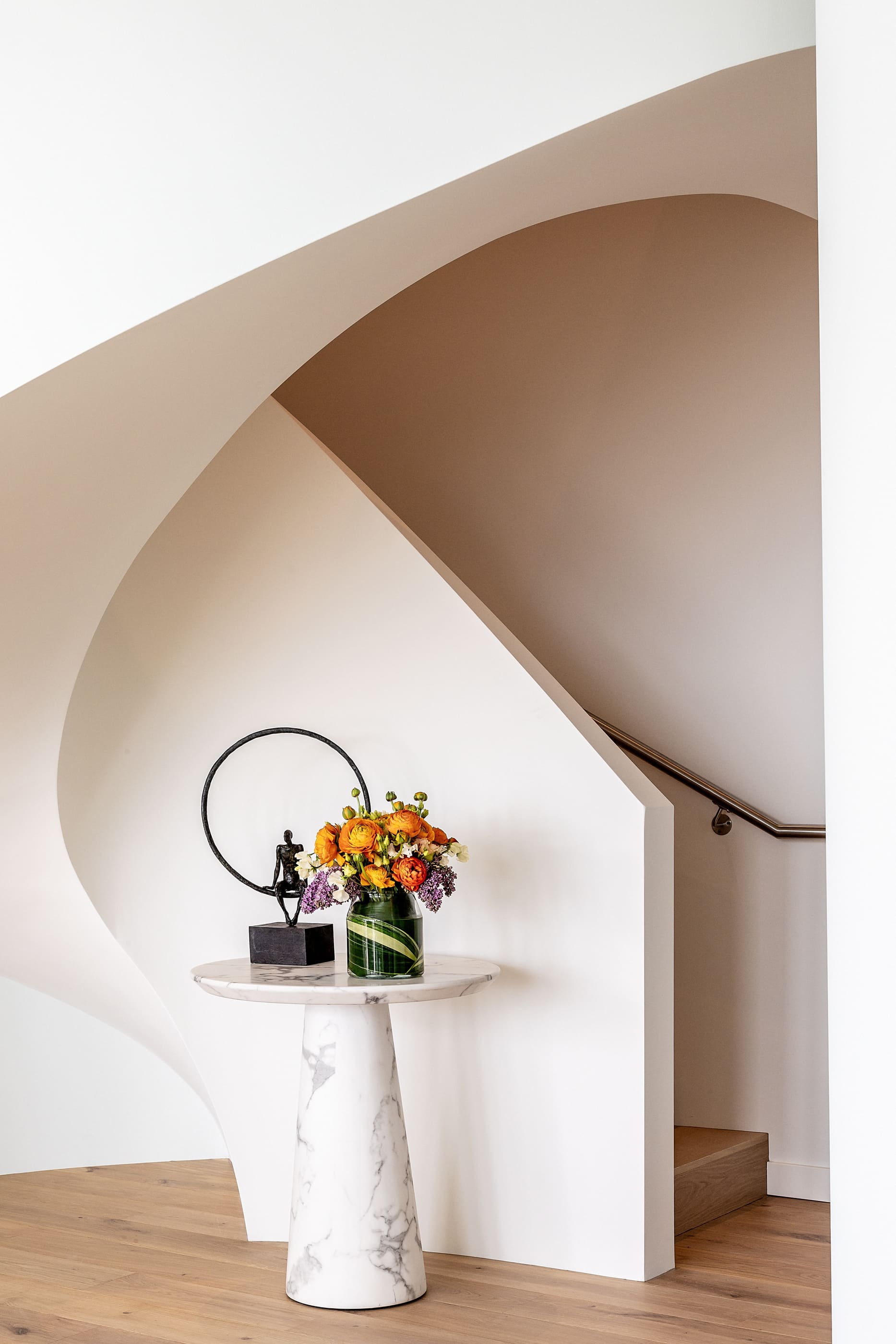 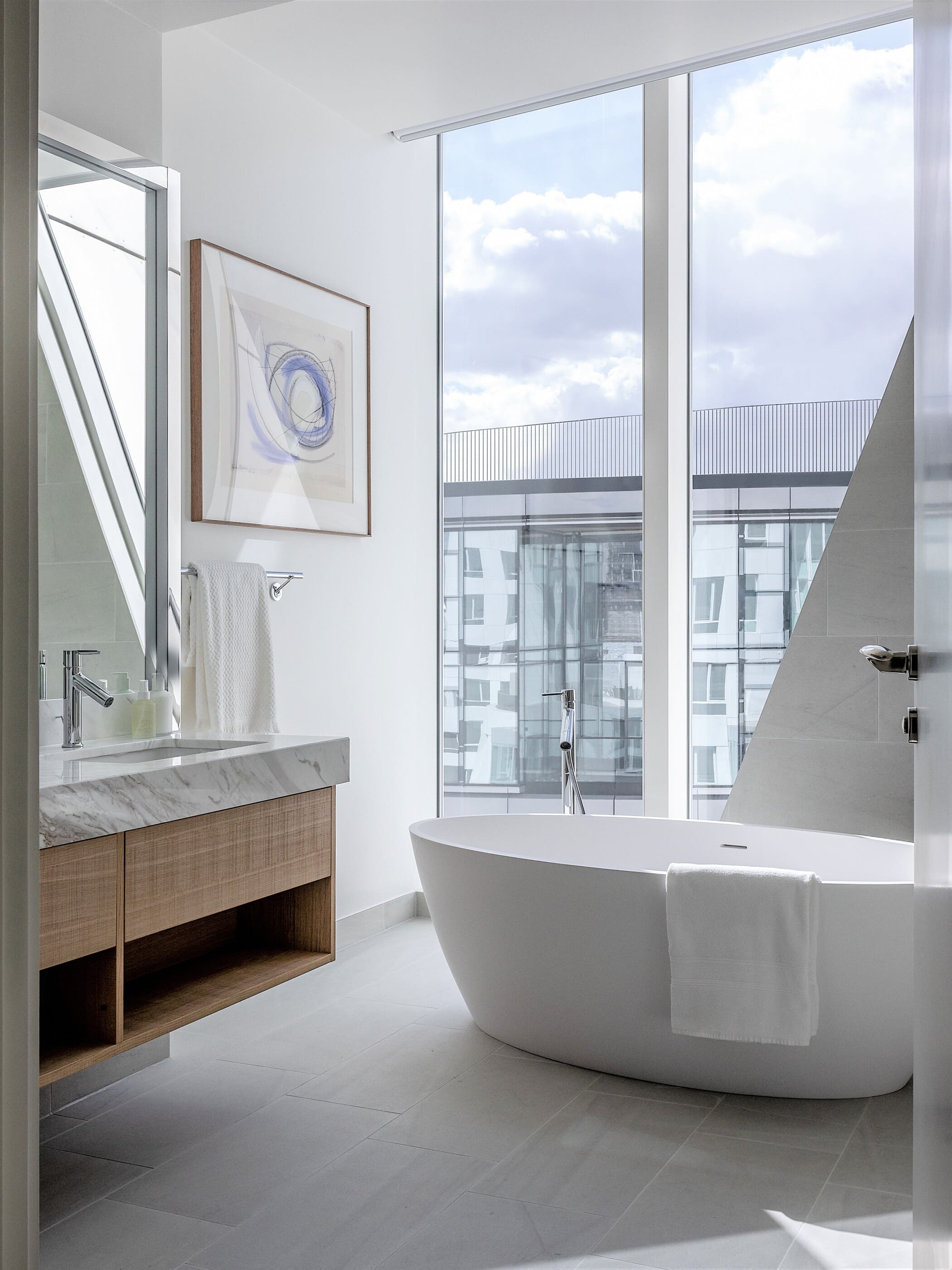 Purchasing an apartment designed by Gehry Partners is similar to buying a one-of-a-kind work of art (image credit: Taran Wilkhu)

The completion of the buildings and arrival of residents follows Switch House West and Switch House East, on the left and right wings of the Power Station, where residents started to move into their homes last year. Originally designed by architect Sir Giles Gilbert Scott, the Power Station has been sensitively restored by lead architect WilkinsonEyre to bring the icon back to life while providing contemporary spaces to live, work, shop and enjoy.

Once completed, Battersea Power Station will be one of the most exciting retail and leisure destinations in London, with major international brands such as Ray-Ban, Ralph Lauren, Tommy Hilfiger, The Kooples, Aēsop and Calvin Klein opening inside the iconic building. As well as over 100 shops, bars and restaurants, office space and a unique events and leisure offering, including the chimney lift experience, there will be a new six-acre riverfront park that is open to the public.

Residents currently living at Battersea Power Station can enjoy a great mix of cafés, bars, and restaurants where they can sample cuisines from all over the world. This includes modern Indian at Vivek Singh’s Cinnamon Kitchen, authentic Italian at Francesco Mazzei’s Fiume and delicious Japanese patisseries and bubble tea at the recently opened Kova, the first of the Power Station’s retailers to open. A variety of entertainment and fitness venues can also be found beneath the railway arches on Arches Lane, including Battersea Brewery, which has its own microbrewery on site, spin studio Boom Cycle, DNA VR, London’s biggest virtual reality arcade, Birdies Crazy Golf, The Cinema in the Arches and The Turbine Theatre.

Battersea Power Station also hosts a variety of cultural events throughout the year with highlights including the Light Festival, Summer Showtime on The Coaling Jetty, London’s first open-air cinema and theatre experience and The Winter Village.

Follow @BatterseaPwrStn to keep up with the latest news and events at Battersea Power Station and visit www.batterseapowerstation.co.uk to find out more.

About Gehry Partners, LLP:
Gehry Partners, LLP is a full service architectural firm with extensive international experience in the design and construction of academic, museum, theater, performance, and commercial projects.

Founded in 1962 and located in Los Angeles, California, Gehry Partners currently has a staff of approximately 150 people. Every project undertaken by Gehry Partners is designed personally and directly by Frank Gehry. All of the broad resources of the firm and the extensive experience of the firm’s senior partners and staff are available to assist in the design effort and to carry this effort forward through technical development and construction administration.

At the heart of the firm’s approach to design is a method in which the client is brought fully into the design process as a member of the design team, making the design a true collaboration between architect and client. Gehry Partners begins work by conducting extensive meetings with the client, and when necessary with representatives of user groups, with community representatives, and with representatives of city and state governments, in order to determine and develop overall project goals and requirements. Programming options and site planning options are determined, developed and presented for review using both written analyses and physical models that permit clear understanding of all options as depicted within the larger context of the site area. Discussions regarding project schedule, project budget, and requirements or specialty consultants are conducted concurrently and continue as work proceeds.

After programming and site planning issues are resolved, the focus of work shifts to architectural design. The architectural design process is based on extensive physical modeling at multiple scales, in which both the functional and formal aspects of a project are explored in detail. Every possible design option is developed using physical models and presented to the client for review. Actual building materials and large-scale mock-ups are employed to promote detailed understanding of the design among all involved parties. As work proceeds, the physical models developed during the early stages of design become more fully refined and as necessary are documented using the computer program Digital Project, a highly advanced three-dimensional surface modeling program developed by Gehry Technologies for use in the architectural, engineering, and construction industry. Digital Project permits detailed surface area and quantity calculations during the design process, and allows Gehry Partners to provide accurate construction cost calculations and consistent cost control as work proceeds. As the design approaches final development, a thoroughly detailed Digital Project model is produced to serve as the primary source of project information during the bidding, fabrication, and construction stages, rationalizing and permitting close control of the construction process.

At any given time the partnership has as many as 25 projects in various stages of development from design through construction. These projects vary in size from the very large scale Guggenheim Abu Dhabi Museum to projects as small as the Ohr-O’Keefe Museum in Biloxi, Mississippi. We have trained our staff carefully, hiring many architects directly from school and keeping them with us as the core of our design and technical teams.