CLOSE
I'm interested in
Acclaimed Portuguese Chef Henrique Sá Pessoa To Open New Restaurant In London Later This Year!
Fill in the form below, and we’ll
get in touch with you soon!
Tell us what you’re
looking for
Home Residential Commercial NEW! Industrial

The new skyline destination restaurant and bar will span over the top floors of the first art’otel to open in the UK and will also feature a rooftop bar with infinity pool overlooking the iconic Battersea Power Station.

The restaurant menu will highlight Sá Pessoa’s culinary heritage and travels across the Iberian Peninsula, using the best of British and Iberian produce. 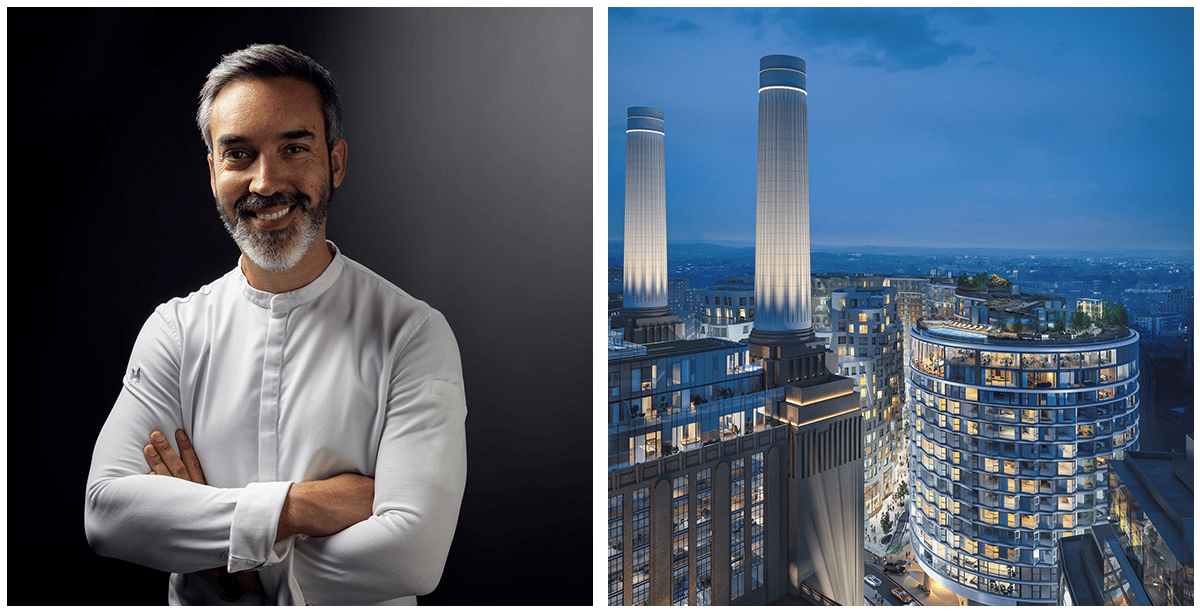 Henrique Sá Pessoa, one of Portugal’s most celebrated chefs, will launch JOIA, an Iberian restaurant and bar at the new art’otel London Battersea Power Station later this year. Situated over the top floors of the first art’otel to open in the UK, JOIA will comprise three distinct spaces, a 15th floor restaurant; a bar on the 14th floor; and a rooftop bar with infinity pool, all overlooking the iconic Battersea Power Station.

Chef Sá Pessoa owns the two Michelin-starred Alma and the relaxed trans-Iberian tapas spot Tapisco in his native Lisbon, and he is the Executive Chef at the critically acclaimed ARCA restaurant (located in art’otel Amsterdam).

His new venture will be an exciting new destination dining spot for London, offering unpretentious yet innovative dishes and warm service in a relaxed, lively setting. Guests can feast on a menu that highlights Sá Pessoa’s culinary heritage and travels across the Iberian Peninsula, showcasing his vibrant, fresh takes on traditional dishes using the best of British and Iberian produce.

The menu at JOIA is particularly influenced by the robust flavours and techniques of Catalonia and Portugal, with a focus on seafood, pork and rice. Dishes will include grilled carabineiro, creamy orzo bisque, tomato, coriander and salted cod crudo, pickled onions, tomatoes, olive oil caviar, with many dishes finished tableside for an engaging dining experience set against a dramatic backdrop of the London skyline.

Set across the 14th floor, JOIA bar will be one of the best cocktail lounges in the capital, offering creative drinks that celebrate Iberian spices to complement the striking floor to ceiling backdrop. Cocktails will sit alongside a broad list of handpicked Portuguese and Spanish wines, with a particular focus on lesser-known producers. Vermouth will also play a significant role in the drinks offering.

Henrique Sá Pessoa, Concept Chef JOIA, said:
“It is such a joy to return to London having trained here in the brilliant emerging scene in the 90s. I love this city and I can’t wait to cook and share with the guests my take on authentic Portuguese cuisine.”

Daniel Pedreschi, Regional VP of Operations United Kingdom, art’otel said:
“It will be an honour to fulfil the potential of this exciting new neighbourhood and build a destination restaurant that attracts guests from far and wide. We are very ambitious with this project and look forward to welcoming guests in the coming months.”

Sam Cotton, Head of Leasing at Battersea Power Station Development Company (BPSDC), said:
"It has always been our aim to bring a vibrant and diverse mix of cafés, bars and restaurants to this exciting new riverside neighbourhood for London and this is evident in the strong offering already open in Circus West Village, the first chapter in the regeneration of Battersea Power Station, and those set to open inside the Grade II* listed building and on Electric Boulevard from this Autumn. Adding a chef such as Henrique with an exciting new restaurant concept to the mix is fantastic and is sure to strengthen our position on the culinary map of ‘must visit’ dining hotspots in London."

The menu at JOIA is influenced by the robust flavours and techniques of Catalonia And Portugal, with a focus on seafood, pork and rice.

art’otel London Battersea Power Station is located within Battersea Roof Gardens, a new building designed by Foster + Partners forming a key part of Electric Boulevard, a collection of buildings comprising homes, offices and a new pedestrianised high street which sits to the south of the iconic Grade II* listed Power Station. Opening from this Autumn, the Power Station will house over 100 shops, bars and restaurants, a luxury boutique cinema as well as unique events and leisure spaces, including a chimney lift experience, which will transport visitors 109m up to the top of the building’s north west chimney, offering stunning 360° views of the London skyline.

For more information about art’otel London Battersea Power Station, please visit: www.artotellondonbattersea.com and follow @artotel to keep up to date with the latest news and events.

For further information on Battersea Power Station, please visit https://batterseapowerstation.co.uk/ and follow @BatterseaPwrStn to keep up to date with the latest news and events.

About Henrique Sá Pessoa
Born in Lisbon, Henrique Sá Pessoa trained at the Cordon Bleu Institute and honed his craft at Panorama restaurant at the Sheraton Hotel and Hotel da Lapa, both in Lisbon, at the Sheraton on the Park in Sydney, and at the Sheraton Park Lane, in London. In 2009 he opened Alma, his first solo project, which would later relocate to Lisbon’s Chiado district in 2015. In this new location, Alma was awarded two Michelin stars in 2018, making Sá Pessoa only the third chef in Portuguese history to receive this accolade. Sá Pessoa also owns a relaxed Portuguese restaurant Taspico which opened in 2017 and is the concept chef for Chiado, a Portuguese restaurant with an Asian influence in Macau, and ARCA, the restaurant at art’otel Amsterdam which opened in 2021. In Portugal, Sá Pessoa is recognised for his appearances on the cooking show Ingrediente Secreto and Chef de Família, and further accolades include winning Portugal’s Chef of the Year in 2005, GQ’s Chef of the Year in 2007, and being placed 38th in The Best Chef Awards in 2021 - the highest new entry that year.

About PPHE Hotel Group
PPHE Hotel Group is an international hospitality real estate company, with a £1.8 billion portfolio, valued as at December 2021 by Savills and Zagreb nekretnine Ltd (ZANE), of primarily prime freehold and long leasehold assets in Europe.

PPHE Hotel Group benefits from having an exclusive and perpetual licence from the Radisson Hotel Group, one of the world's largest hotel groups, to develop and operate Park Plaza® branded hotels and resorts in Europe, the Middle East and Africa.

About Battersea Power Station
Battersea Power Station is one of central London’s largest, most visionary and eagerly anticipated new riverside neighbourhoods. The £9bn regeneration project is delivering a vibrant, mixed-use destination offering a community of homes, shops, restaurants, offices, culture and leisure venues, as well as 19 acres of public space, all serviced by an extension to the London Underground Northern Line.

The Grade II* listed Power Station, the second phase of the development, opens to the public from this Autumn, housing over 100 shops, restaurants and cafes, events venues, a unique chimney lift experience offering 360-degree panoramic views of London’s skyline, new office space and 254 new residential apartments. The first residents moved into the Power Station in 2021.

Circus West Village, the first chapter of the regeneration of Battersea Power Station, is already a thriving riverside destination and home to over 1,800 people. Offering an eclectic mix of independent and design-led bars, restaurants, shops, fitness and wellbeing facilities, a cinema, a theatre and an ongoing events programme, this new neighbourhood welcomes over three million people on average per year.

With the recently opened Zone 1 Battersea Power Station Underground station on the Northern Line Extension, the development is only a 15 minute journey from the West End and the City. It also has its very own Uber Boat by Thames Clippers pier and is a 15 minute journey from Embankment, 20 minutes from Blackfriars, 30 minutes from Putney and 40 minutes from Canary Wharf. Battersea Power Station is easily accessible by bus, bike, car and train too.

The wider Battersea Power Station development is owned by a consortium of Malaysian investors comprising Sime Darby Property (40%), S P Setia (40%) and The Employees’ Provident Fund (20%), with the commercial assets within the Power Station building now being directly owned by Permodalan Nasional Berhad (PNB) and EPF.

Management of the development is being undertaken by the British-based Battersea Power Station Development Company.