CLOSE
I'm interested in
Battersea Power Station Opens Friday 14 October 2022!
Fill in the form below, and we’ll
get in touch with you soon!
Tell us what you’re
looking for
Home Residential Commercial NEW! Industrial

The London landmark will open to the public for the first time ever with the first shops, bars, restaurants and leisure venues 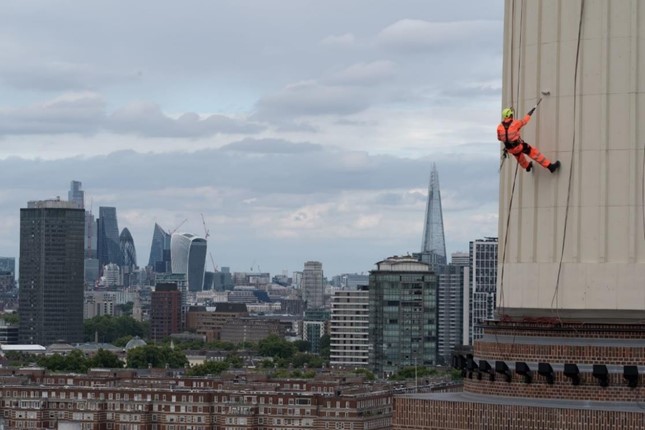 Finishing touches being added to Battersea Power Station’s iconic chimneys in preparation for the public opening on 14th October 2022.

Battersea Power Station announces today that it will open its doors to the public for the first time in history from Friday 14th October 2022. Electric Boulevard, a new pedestrianised high street, which runs from the south of the Power Station, between Frank Gehry’s Prospect Place and Foster + Partners’ Battersea Roof Gardens to the new Battersea Power Station Zone 1 Underground station, will also open on the same day.

The London landmark’s opening date was officially announced this morning in front of the Power Station by a group of newspaper boys and girls dressed in 1930s attire, in a nod to when Battersea Power Station first started generating electricity back in 1933. The group will be spreading the exciting news across the capital throughout the day by handing out a limited- edition newspaper, Power Station Post.

Ten golden tickets have been hidden within the newspapers and if found, the lucky golden ticket holder will be amongst the first to walk into the Grade II* listed building on 14th October. They will also win two tickets to LIFT 109, a glass elevator experience which transports visitors 109 metres up to the top of the building’s north west chimney, offering panoramic views of London’s skyline.

At its peak, Battersea Power Station supplied a fifth of London’s electricity. The building was decommissioned in 1983 and during the years that followed, several failed attempts were made to redevelop the site. The Power Station has been under the custodianship of the current shareholders, Sime Darby Property, S P Setia and the Employees’ Provident Fund (EPF) since 2012, and during this time, the Grade II* listed building has been painstakingly restored to its former glory. In 2019, PNB and EPF became the long-term commercial asset holders securing the future of the landmark for many generations.

Almost 40 years after Battersea Power Station’s lights were switched off, the icon is back and set to become one of London’s most exciting retail and leisure destinations. The building’s retail offering is housed in the Power Station’s two newly restored, historic Turbine Halls, which although identical when viewed from the building’s exterior, are completely unique in their interior design. Turbine Hall A reflects the lavish Art Deco glamour of the 1930s when the Power Station was built, whereas Turbine Hall B which was completed in the 1950s, has more of a brutalist, industrial look and feel.

Inside the Turbine Halls, shoppers will find an array of British and international brands, with the first wave opening in October including the likes of Hugo Boss, Theory, Lacoste, Ralph Lauren, Aesop, Space NK, Ace + Tate, lululemon, Mulberry, Jo Malone London, Uniqlo, Mango and a new neighbourhood bookstore, Battersea Bookshop, from specialist bookseller Stanfords. Further brands will be announced in the lead up to the grand opening.

The Boiler House at the heart of the Grade II* listed building will also be home to the recently announced 24,000 sq. ft Arcade Food Hall from JKS Restaurants which will open in 2023. Other food and beverage venues joining the line up inside the Power Station are Le Bab, Where The Pancakes Are, Poke House, Clean Kitchen Club, Gordon Ramsay’s Bread Street Kitchen & Bar and Paris Baguette. These will complement a great mix of bars and restaurants already open in Circus West Village, the first chapter in the regeneration of Battersea Power Station, including Sugen Gopal’s Roti King, Tapas Brindisa, Wright Brothers, Vagabond Wines, Megan’s at the Power Station, Battersea Brewery, Francesco Mazzei’s Fiume and Vivek Singh’s Cinnamon Kitchen to name a few.

The Power Station’s two Control Rooms, which managed the distribution of power from Carnaby Street to Wimbledon – even powering Buckingham Palace and the Houses of Parliament, have also been fully restored. Control Room A is set to become a unique events   space and Control Room B has been transformed into an exciting new all-day bar concept, where patrons will be able to get up close and personal with the Control Room’s original dials and controls.

Also opening inside the Power Station will be a host of entertainment venues that are sure to cement Battersea Power Station as one of London’s go-to leisure destinations, including The Cinema at the Power Station – whose sister site The Cinema in the Arches is located under the railway arches in Circus West Village. It will play host to a private members club alongside showing the latest blockbusters in their state-of-the-art screens.

Electric Boulevard, a new high street for the local community will also open on 14th October. The new high street will offer a mix of bars and restaurants, office space, shops, a park, community hub and a new 164 room hotel from art’otel, the brand’s first hotel to open in the UK. Retailers already announced to be opening on Electric Boulevard include high street favourite, ZARA, a new-concept M&S Foodhall and a 28,000 sq. ft club from London fitness brand, Third Space, opening in 2023.

Simon Murphy, Chief Executive Officer at Battersea Power Station Development Company (BPSDC), said: “It has taken a lot of hard work, determination, and the continued commitment of the Malaysian Shareholders over the past ten years to bring Battersea Power Station back to its former glory. Announcing that we will be opening the building to the public for the first time in history in just over a month’s time is a monumental moment for the project. We can’t wait to welcome the first visitors, and show the local community, Londoners, and the rest of the world, the historic beauty of the Grade II* listed building, which has been transformed into London’s most unique destination for all to enjoy.”

Over 2,500 new jobs will be created once the doors to the Power Station open, with a total of 17,000 jobs once the whole 42-acre project has completed.

With the Northern Line extended to give this new riverside neighbourhood its very own Zone 1 London Underground station, Battersea Power Station is now within 15 minutes of the West End and the City and is expected to draw visitors from across the capital and the globe, becoming one of London’s most visited destinations. Battersea Power Station is also easily accessible via the Uber Boat by Thames Clippers river bus service, bike, train and on foot.

For more information, please visit www.batterseapowerstation.co.uk and follow @BatterseaPwrStn to keep up to date with the latest news and events.