CLOSE
I'm interested in
First Interior Images Unveiled of Art’otel London Battersea Power Station!
Fill in the form below, and we’ll
get in touch with you soon!
Tell us what you’re
looking for
Home Residential Commercial NEW! Industrial 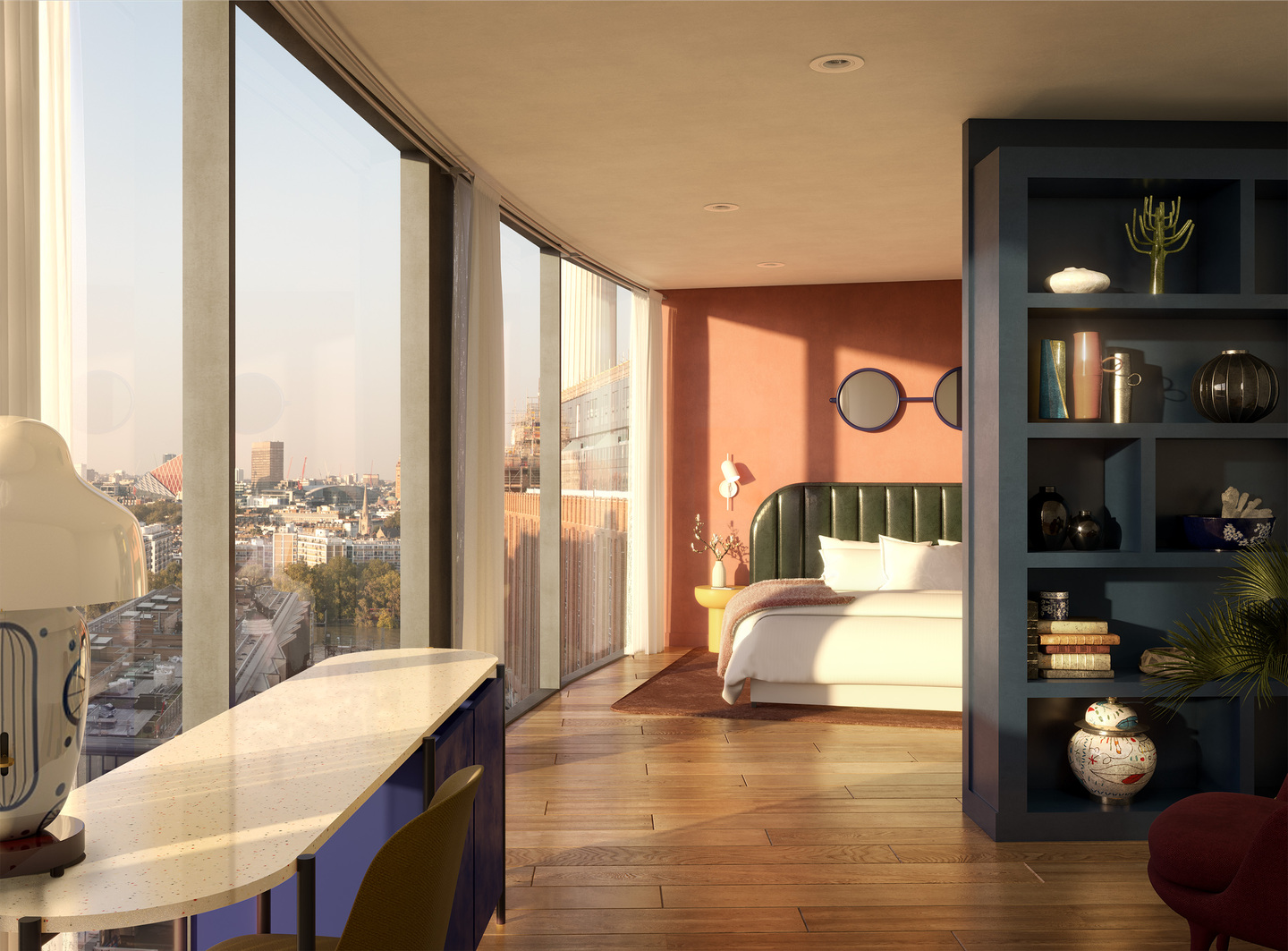 Images of London’s first art’otel have today been unveiled ahead of its opening at Battersea Power Station later this year.

Award-winning Spanish artist and designer, Jaime Hayon, has been appointed as the interior designer and Signature Artist for this art-inspired, boutique lifestyle hotel and his designs can be seen for the first time in new imagery of the guest bedrooms and public areas released today.

The first art’otel to open in the UK will be located within Battersea Roof Gardens, a new building designed by Foster + Partners forming a key part of Electric Boulevard, a collection of buildings comprising homes, offices and a new pedestrianised high street which sits to the south of the iconic Power Station. The 164-bedroom hotel will feature a new skyline destination restaurant and bar, rooftop swimming pool, as well as a gym, spa, event facilities, a Grand Café and Art Gallery. Progress on the hotel’s construction is nearing completion, with the guest rooms, bar and restaurant now being fitted out.

Hayon’s designs are inspired by the Power Station’s history and heritage as well as its future at the centre of a new cultural district and neighbourhood for London. The guest bedrooms showcase a bold and colourful palette while art plays a key role in the wider design concept of the hotel. Hayon is one of the most acclaimed designers worldwide, with work showcased at high-profile galleries and exhibitions including London’s Design Museum, High Museum in Atlanta, Daelim Museum in Korea, Groninger Museum in the Netherlands and Design Museum Holon in Israel.

Jaime Hayon, Founder of Hayon Studio, said:
“I was very excited at the opportunity to develop the interior design for a London hotel project at Battersea Power Station, which is set to become a new hub for art and creativity. The leading role of art at art’otel London Battersea Power Station makes this a unique prospect to explore the interaction between art, product and interior design and I look forward to creating something truly special in this iconic central London location.”

Simon Murphy, CEO of Battersea Power Station Development Company (BPSDC), said:
“2022 is an incredibly exciting year for Battersea Power Station as we prepare to open the Grade II* listed Power Station and Electric Boulevard to the public from September. The art’otel plays an integral role in the vibrant new riverside neighbourhood we’re creating. Once the hotel is open later this year, it will be a unique place to stay and dine with its stunning rooftop swimming pool overlooking the Power Station’s famous four chimneys and art inspired Hayon interiors.”

Boris Ivesha, President & Chief Executive Officer, PPHE Hotel Group, added:
“Jaime Hayon’s diverse expertise made him an obvious choice when selecting a designer for this exciting new hospitality and arts venue which sits at the heart of a new cultural quarter for London. Hayon is an exciting, internationally acclaimed artist whose designs sit outside of the typical hospitality mould, reflecting the distinctive energy of the art’otel brand. His vision will perfectly complement the architecture of Foster + Partners, making this a centre of design excellence.”

The restoration of the Power Station is nearing completion, with residents now living inside the Grade II* listed building and new retailers, including Ralph Lauren, Ray-Ban, Lacoste and Calvin Klein, announcing they will be opening their doors from September. Once open to the public, Battersea Power Station will house over 100 shops, bars and restaurants, a luxury boutique cinema as well as unique events and leisure spaces, including the chimney lift experience. The glass elevator will transport visitors 109m up inside one of the Power Station’s iconic chimneys before they emerge at the top to enjoy unrivalled 360 degree views of the capital’s skyline. Residents and visitors to Battersea Power Station will be able to enjoy numerous new green and open public spaces, including the recently opened six-acre Power Station Park, which sits directly in front of the building on the banks for the river.

With the Northern Line now extended to give this new neighbourhood its very own Zone 1 London Underground station, Battersea Power Station draws Londoners, international visitors and workers from across the capital with journey times to the West End and the City taking approximately 15 minutes. It will be one of the go-to places for South West London, boosting the local economy and creating over 17,000 jobs.

Circus West Village, the first chapter in the regeneration of Battersea Power Station, is already home to over 1,700 residents and a number of bars, restaurants, cafés and fitness and leisure offerings including Japanese patisserie Kova, Fiume, an Italian restaurant by Francesco Mazzei, wine bar Vagabond, The Turbine Theatre and Archlight Cinema. The thriving riverside neighbourhood welcomes three million people on average each year thanks to its annual events programme. Recent highlights include the Light Festival, The Winter Village and Summer Showtime on The Coaling Jetty, London’s first open-air cinema and theatre experience.

For more information about art’otel London Battersea Power Station, please visit: www.artotellondonbattersea.com and follow @artotel to keep up to date with the latest news and events.

For further information on Battersea Power Station, please visit https://batterseapowerstation.co.uk/ and follow @BatterseaPwrStn to keep up to date with the latest news and events.